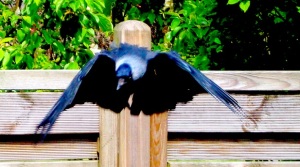 One of those little ironies of life is that although I’m pretty much opposed to the notion of organised religion, I’ve always fancied setting my own up.  For such an exercise, I think it’s important to try and learn some lessons from the mistakes of those who have gone before you.  Here I present my 5 golden rules:

1. Consistency is key to credulity.  Obviously I want a nice shiny book enshrining my laws for humanity but it would be a bit sloppy if I suggested one thing in one place and the opposite in another.  Like it would be kind of weird to suggest jealously, violence and genocide are okay in one part of my book and then just concentrate on love and peace in another part.

2.  Choose your followers carefully.  I don’t want people who can’t follow the basics of what I say.  It would be awful, for example, if I wanted to convey it’s cool to be poor, and then my biggest group of followers became one of the wealthiest institutions on earth.

3. Always think ahead.  I’d look really foolish if I gave my minions careful rules about how to slaughter animals for food, only to discover that people finally discover eating animals is immoral a few years later.  Likewise, giving advice on how to go about slave owning, only to discover it’s actually horrendously unethical must bring about a slight twinge of embarrassment.

4. Don’t say rude things about half the population.  My religion will have a feminine glow to it but I don’t want to exclude men, as their inclusion will boost my minions.  I guess if I tell women to look after men and be nice to them, the fact that I tell the men to just shut up when women are doing important stuff probably won’t be off-putting at all.

5. Write entertaining stories to tell people where they came from but don’t make them too silly, just in case science or logic come along to ridicule you.  That seems fairly obvious.  Being really brainy it hopefully won’t be an issue for me.  If only I were omniscient …

There we go.  I hope these are helpful for any other budding deities out there.  If you can think of anything I’ve missed, please let me know!

← an imaginary exercise for all men (and some women too)
is morality timeless? →

12 thoughts on “tips for budding deities”