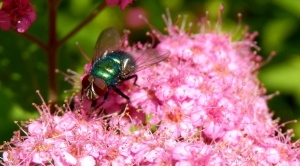 on the planet Obstreperon, where patriarchy was abolished centuries ago following the Spinster Aunt Rebellion of 3658, “male” and “female” are quaint anachronisms, recollected only dimly by the creakiest and wispiest of superannuated crones who in their innocent youth were told frightening tales by their frail grannies about anti-abortion legislation, plastic surgery, pornography, and the horrid olden days before uterusbots liberated the sex class. Since on the planet Obstreperon there is no sex-based oppression context within which to define femininity, the word has no meaning and the behavior does not exist. (iblamethepatriarchy.com)

I find some aspects of the discussions around gender identity within radical feminist circles a bit odd. Suggestions that there are no underlying gender differences, and that both females and males are simply complying with the constructs of oppressive-with-intent behavioural norms, seem to be grounded in limited personal experience (from moving in circles of similar people) and wishful thinking.

Interestingly enough, before I spent serious amounts of time with babies and children, I was happy to believe the same thing.  If I hadn’t had babies who fell plunk in the average gender-based development milestones, in such basic areas as communication and movement, and if I hadn’t hung around with parents whose babies did similar things (not all, not all) I might well still be making that assumption. If I hadn’t read studies of other cultures and other species confirming these kind of general differences are fairly universal to all animals (although sometimes in reverse to our expectations), I might still be doubting what I’d seen with my own eyes in humans.

However, while acknowledging key gender characteristics can broadly fall across sex groups, I’m more than happy for so-called gender roles to be worked over and for everyone to be given free rein to pursue whatever they find interesting, whatever makes them happy, without feeling the pressure of gender expectation, the pain of ridicule, or the barriers that come from closed-thinking. This is a work in progress for society and I salute radical feminists who doggedly pursue it.

The thing is, I’m not entirely clear how we achieve it, given what we know about natural human behaviour.

People look for role models, people moved in herds of similar. Children all over the world from around the age of three start to identify with other kids they view as similar, and start to put people in boxes of ‘like me’ and ‘not like me’. We can take positive steps to minimise these boxes, but cries of ‘I don’t want to play with boys because they’re stupid’ (they can’t express themselves as clearly, they bomb around knocking people over, they don’t understand social cues to the same degree etc) and ‘I don’t want to play with girls because they’re stupid’ (they don’t join in the fun games bombing around, they’re bossy and talk too much or sit boringly in the corner playing with quiet toys etc’) for the majority of children are fairly common. And for those for whom these boxes don’t come as naturally, they hear the other kids saying it, so many will parrot it, and before you know, may actually believe it too.

Obviously, obviously, this description doesn’t fit all kids – it’s the general pattern of average hormone impact on middle distribution kids. Individuals are all over the place on any given characteristic, and that’s why it’s important not to pressurise children into any specific role (any more than they naturally pressurise each other …)

So, for me, what radical feminists are often pushing for, this seeming utopia of the genderless society, sounds a bit like yet another artificially engineered new world order with unknown repercussions. What would a world look like where we consciously try to obliterate the natural mimicking and grouping instincts of all children? How do we tread the delicate line between not continuing to propagate the admittedly harmful pressures of suppositional gender identity in a gender-biased society, with not over-writing the norms generated by gender-specific hormones and the herding instinct of a gender group divide?

Frankly, I have no idea.

But, one area I am quite clear on, is that our individual sense of what aspects of gender are pure construct need not coincide with the experiences of others, and what feels innately natural to them. I would encourage anyone attracted to the general radical feminist view on this issue to consider that their personal experience of gender roles, and their individual response to how they wish to subvert what is the current norm, cannot be used as a stick to beat anyone else who, for whatever reason, wants to express themselves according to what is considered ‘stereotypical’.

We cannot say on one hand that everyone should be free to express themselves as they wish, and on the other hand insist “but not like that!”. If we do, we become as mindlessly prescriptive as the patriarchal norm we seek to change.

More of my thoughts on gender roles can be found on these posts:

caught in the middle – are gender differences real?