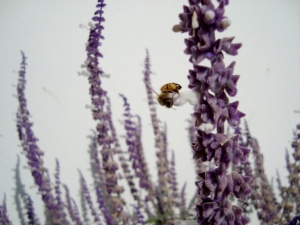 This is the second post in my new series publishing comments that surprise me as I lurk round Christian blogs. Two things were brought to my attention yesterday that have affected today’s choice of comment. The first is a suggestion from a Christian reader about the possibility of publishing some nice stuff too, which I think is perfectly reasonable. And the second is an excellent point made by this blogger about the dangers of killing off the weak forms of Christianity, leaving room for an evolutionary-primed, impregnable superbug religion, rather than simply atheism as I had naively assumed.

So, in an effort to be nice to Christians and to support the nicer interpretations of the Bible that do actually exist, I present an extract of a comment from a Christian blogger attempting to defend the rights of silly women to be allowed to talk to actual men about serious and difficult to understand religious matters in their non-discriminatory house of worship (or anywhere, actually). Enjoy!

I’ll make you a deal. I’ll prevent women from speaking in church if you prevent them from walking in wearing expensive clothes, gold, pearls, and elaborate hairstyles. I’ll also apply Paul’s primogeniture logic if you are willing to enter into a culture, like Paul’s, where the firstborn has greater honor in all things. I’ll also bar women from teaching if we can all agree that women are simply easier deceived than men. And, lastly, I’ll keep women from teaching as long as you add bearing children as a requirement for their salvation.

I’m obviously being silly! Ha! But my point is real: if we’re going to make some of this transcultural, we need to make it all transcultural. I’m pretty passionate that we need to obey the Bible. If we really interpret it to say that women can’t teach men, period, then we need to stop playing games. Forget personal and direct: we need to stop reading books by women, listening to them teach the Bible in any context, and perhaps not accept any instance of a woman exercising authority over a man. It doesn’t help us to interpret it one way, and then find applications that contradict our interpretation.

The quote in the above post is a great example of this. Rather than enforcing Paul’s simple directive that women can’t teach men, his application actually said the opposite: he declared that women CAN teach men, just as long as it’s not in person. So, this pastor and I agree: neither of us interprets Paul as saying a woman can never teach a man. We both agree that a woman can teach a man on any Biblical topic, and she can teach a boy, a man, an elder, or even a sr pastor. The only difference between us is that this pastor made up a distinction based on physical proximity.

← lurking 1: health and wealth
lurking 3: how to get to heaven →